Regina Maris in the Arctic 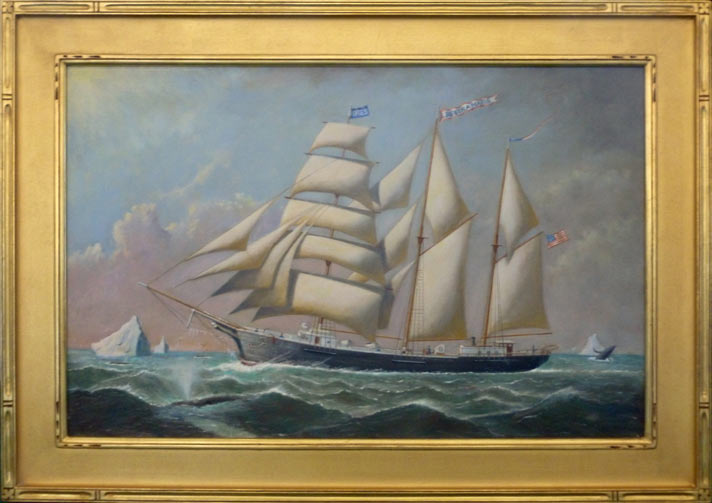 The tall ship Regina Maris was the subject of a book written by Harvey Oxenhorn published in 1990, titled "Tuning the Rig A Journey to the Arctic." The book has since become a modern maritime classic. The painter once served as crew on the ship, which was involved in research on humpback whales. The beloved captain was George Nichols Jr. 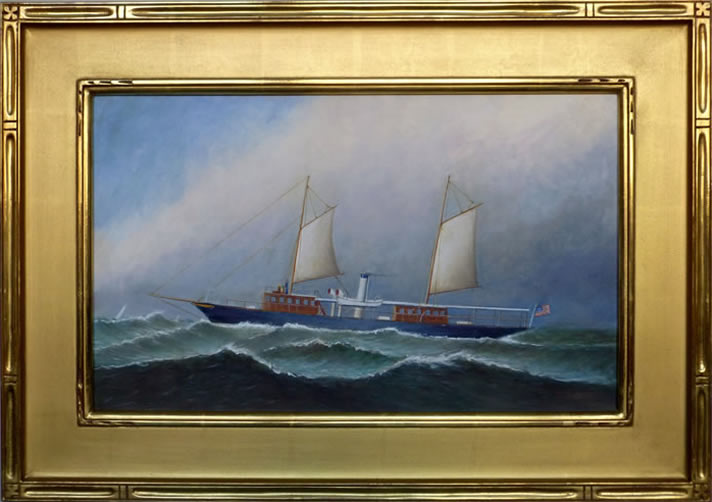 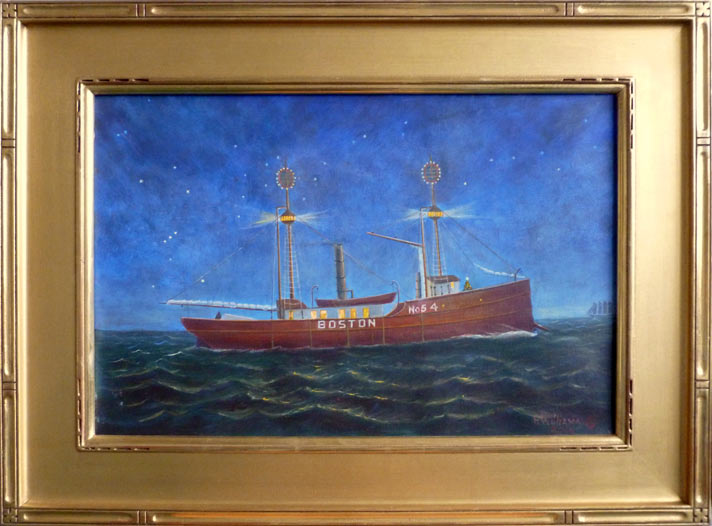 The Lightship Boston No. 54 served as a navigational aid for shipping entering Boston Harbor between 1893-1894. Built of iron, which was an innovation at the time, she was originally intended to serve off Nantucket’s New South Shoals but was not built strong enough and almost foundered during her first storm. She was thus transferred to the Boston location after having nearly been lost twice off Nantucket. The painting depicts the lightship on Christmas Eve in 1894 with her whale oil lamps ablaze in the darkness. There seems to be a Christmas tree on the forward deck. The constellations in the sky are from left to right Orion, Scorpio, and the Big Dipper. 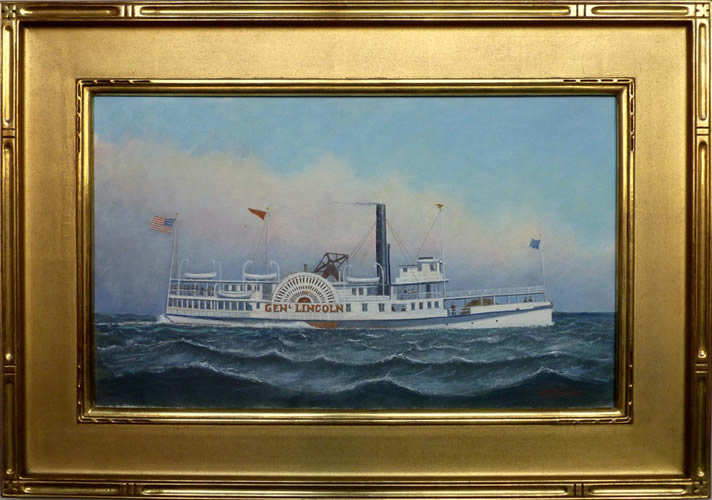 In 1884 the Hingham, Hull and Downer Landing Steamboat Company purchased the steamer “Nahant,” built in Chelsea in 1878. They made improvements upon her and changed her name to “General Lincoln,” in honor of General Benjamin Lincoln who was from the town of Hingham and served under General George Washington during the American War of Independence. General Lincoln’s house still stands by Lincoln Street, overlooking what was then called Fountain Square. The steamer ran between Downer’s Landing Hingham and Rowe’s Wharf in Boston, which remains a terminus for South Shore and airport commuters traveling by boat. The original painting measures 17" X 24" framed. 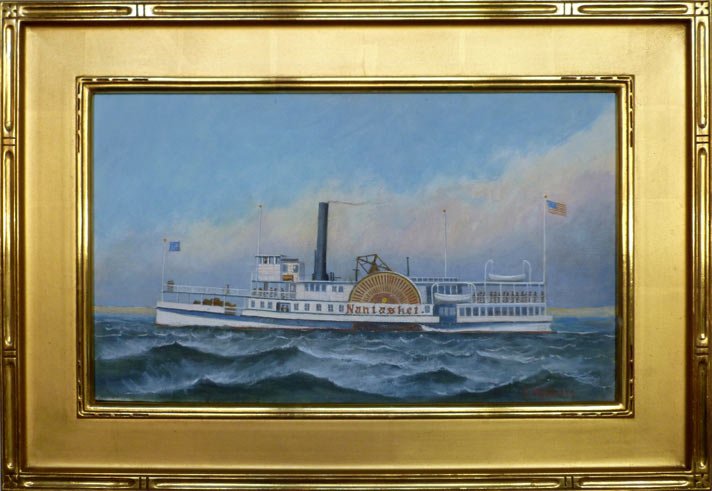 The steamer Nantasket, built in Chelsea, MA, was purchased by the Boston and Hingham Steamboat Company in 1878 to increase its fleet to three boats. Like the General Lincoln she was equipped with a walking beam engine which projected from the top deck. She was one of three steamers on the line to carry the name “Nantasket,” at different times. She ran between Boston, Hingham and Nantasket. When in Boston she loaded at Rowe’s Wharf, which remains an active terminus for South Shore and airport commuters traveling by boat. The original painting measures 17" x 24" framed. 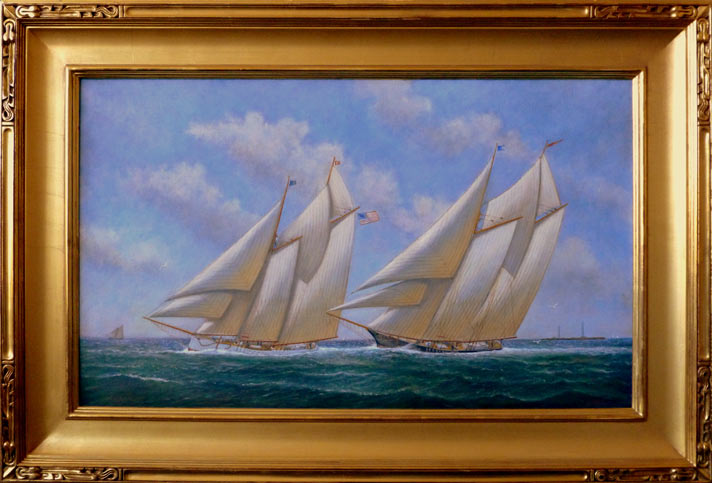 This painting depicts two Essex, MA built schooners, designed by Edward Burgess of Boston, racing during a planned encounter about 1889. The twin lighthouses on Thatcher’s Island, off Cape Ann Massachusetts are seen in the distance.

The CARRIE E. PHILLIPS, the white schooner seen on the left side of the painting was built in Essex MA by Arthur D. Story in 1887 on the site of what is now the Essex Ship Building Museum. She was the first fishing schooner designed by Edward Burgess, who had made his reputation designing the yachts Puritan, Mayflower and Volunteer for the America’s Cup Races. Her spike bowsprit was one of many of her original design features, and she fished out of Provincetown, MA.

The FREDONIA is the black schooner seen to the lee side of the CARRIE E. PHILLIPS, and was built in Essex at the yard of Moses Adams in 1889. She began her life as the yacht of the well-known banker J. Malcom Forbes of Boston, but the ship afterwards became a fisherman. Burgess’s design for this vessel was inspiration for the design of many future Gloucester fishing schooners as well as the Friendship sloop, which was built in Maine for the lobster industry.

Formal and informal races were a way for designers to measure the success of their latest designs but for owners they were often a test of ego. 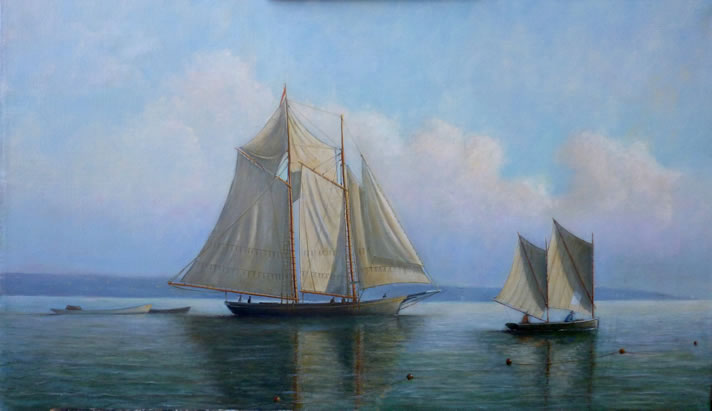 The little schooner on the right side of the composition is a “Duxbury Lobster Boat,” a type originally adapted for harvesting lobsters in the shallow waters off Duxbury Massachusetts. The design was modified for pleasure and racing during the summer months of the late -19th century. The larger schooner is a typical New England mackerel schooner engaged in the now non-existent but once profitable mackerel fishery. The seine boat she is towing carries the large purse net to snare schooling mackerel. Tellingly, scientists who report on fish stocks off the East Coast in the Gulf of Maine have not tracked mackerel, or smelt for many years since they are no longer commercially relevant, although they were once plentiful.

The completion of this picture required my most strenuous artistic efforts during the year 2014 and is inspired by the 19th century luminist School of Painting. 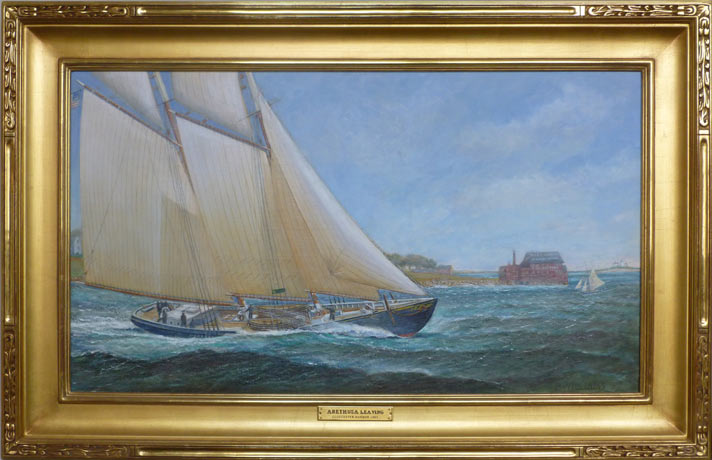 After a successful career as a Gloucester fishing schooner, the Arethusa was purchased at auction by Captain Billy McCoy, who converted her to a rum runner during the Prohibition Period. McCoy distributed imported Irish Whiskey all along the East Coast of the US and Canada in a highly profitable scheme that caught the attention of Federal Authorities who eventually had him tried and sent to prison. Billy never sold bathtub quality beverage, and if you bought from Billy it was always the “Real McCoy.”

The Arethusa was built in Essex MA in 1907 at the yard of James and Tarr and designed by Tom McManus. 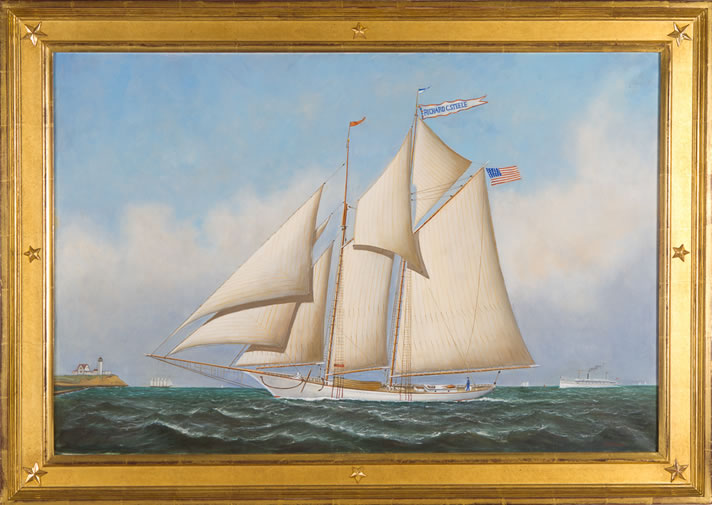 The newly launched Fishing Schooner Richard C.Steele heads into Gloucester Harbor approaching Eastern Point Light and the breakwater in the summer of 1894. Off to the right the steamer Cape Ann returns with day trippers from Boston. Beyond the lighthouse, a 5-mast coal schooner is heading back to Norfolk for a cargo of coal which will heat New England homes during the coming winter season. The Richard C. Steele was designed by Tom McManus, a former Boston fish dealer who eventually produced many successful fishing schooners for the Gloucester and Boston fishing industry before the invention of the gasoline engine. The painting measures 24" x 36" and the outside of the frame measures 29 1/2" x 41 1/2" The frame is by Guido. 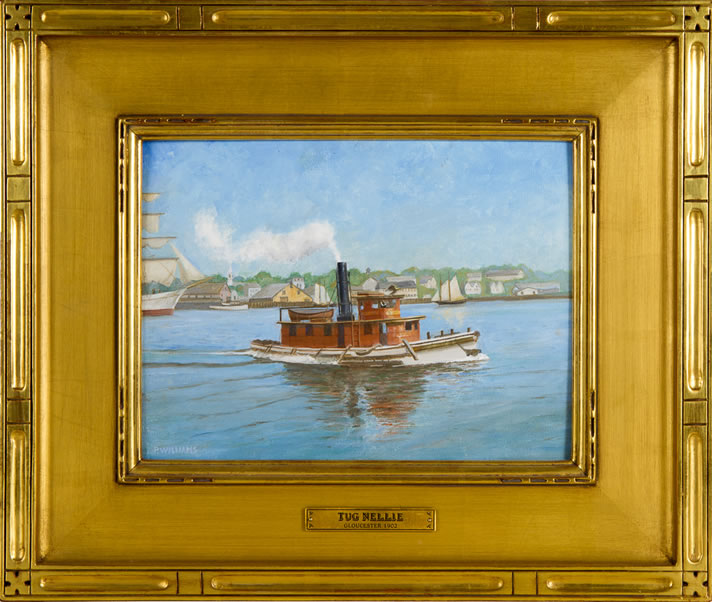 On a beautiful summer day the Tug Nellie steams past a salt barque drying her sails at Parson’s Wharf in East Gloucester. Various wharf buildings a church steeple and homes can be seen in the background. The painting measures 9”x 12” and the outside of the frame measures 16" x 19" Motyka provided the frame. 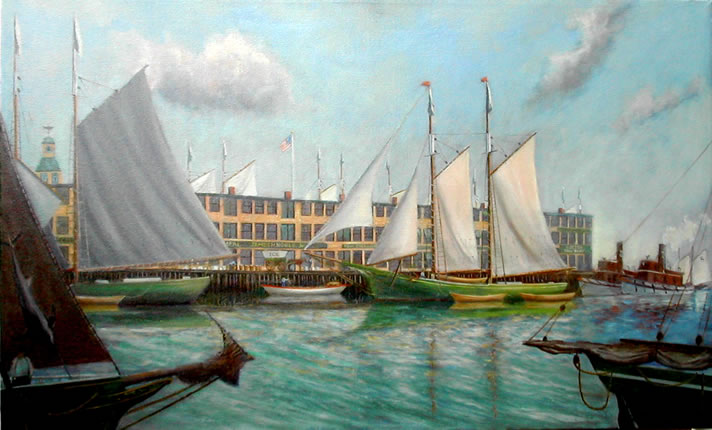 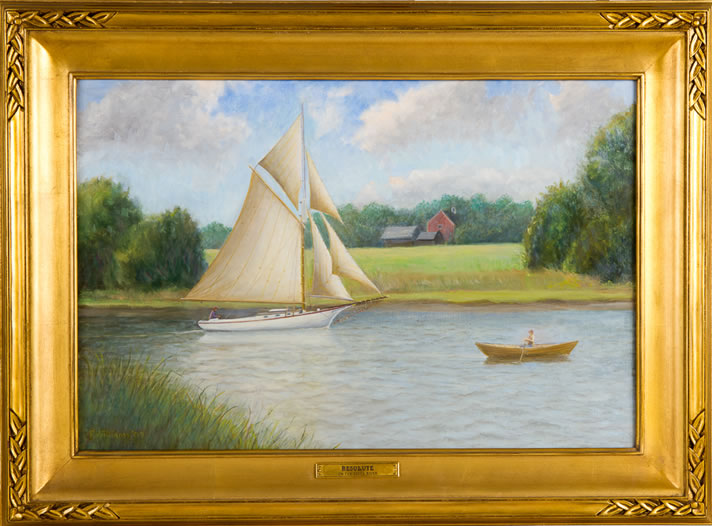 Charlie Burnham of Essex Massachusetts is a descendant of the earliest colonial boat builders in the town of Essex, MA, and in this painting he heads down the Essex River in the sloop Resolute, which he built with his own hands. Boatbuilding runs deep in the Burnham family, and his son Harold continues the family tradition. The Resolute passes the barns of "Cogswell's Grant," a property owned and maintained by Historic New England. No visit to Essex could be complete without signing up for a tour of the fascinating house, barns and grounds there. 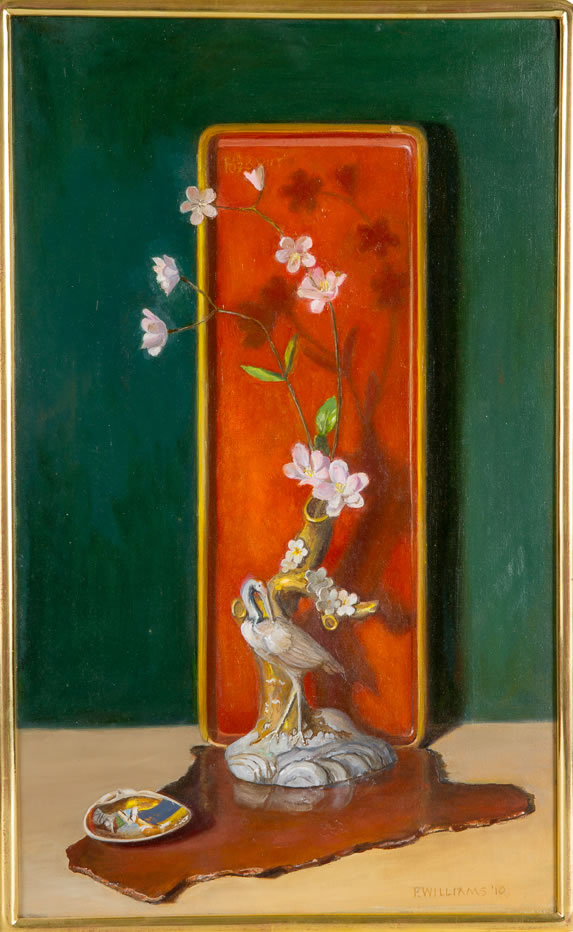 During visits to a nearby antique shop I acquired many of the objects that are seen in this painting, including the red lacquer tray, the painted clam shell in the foreground, and the flat piece of polished wood with natural curved edges. After completing this painting I learned that the polished wooden object was most likely intentionally crafted for use in traditional Japanese floral arrangements to give a sense of natural form to the designs. I had discovered its purpose without knowing it beforehand! Painting measures 14" x 23", framed size is 15" x 24" by Guido. 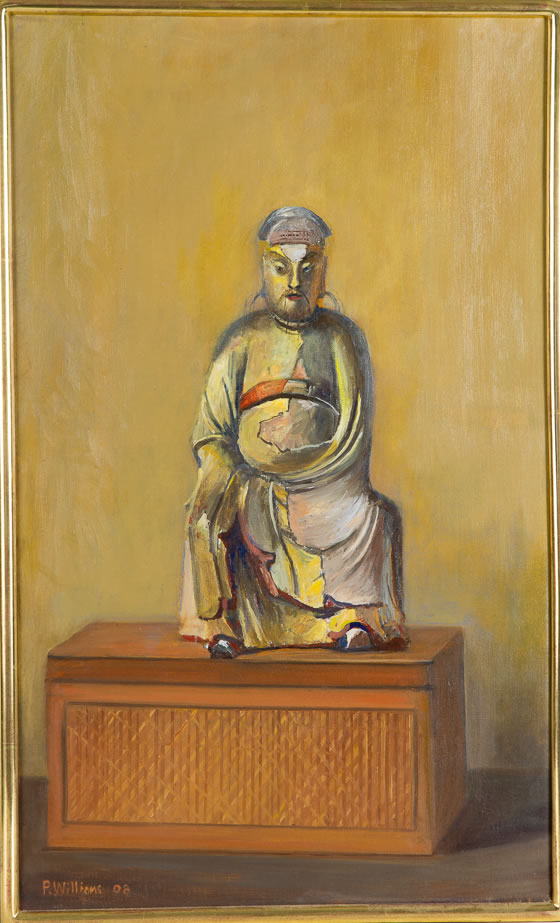 The partial disintegration of a work of art can be an artistic expression in itself, as I discovered when planning this painting. This gilded god seems indifferent to his physical deterioration as if his spirit reigns over matter. The challenge to the painter was to describe the decay convincingly on canvas and to paint the reed tea caddy so the viewer would understand what is was made of. The painting measures 14" x 23", framed size is 15" x 24" by Guido.

An inspiration for this painting may have been some of the fine 19th century American still life paintings which I have studied and restored. By choosing to depict objects such as etched glass, Venetian glass, a leather book, velvet, paper and sealing wax in my painting, I stretched my limitations. The painting measures 18" x 22", framed size is 25" x 28" by Mike Shilhan. 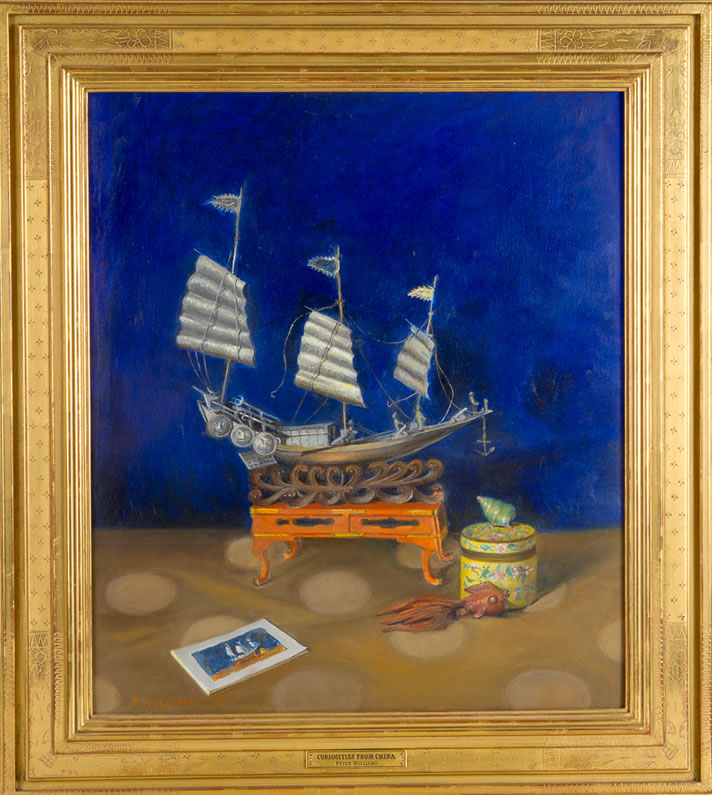 When I was working for the John F. Kennedy Presidential Library years ago, I discovered a silver Chinese ship model that had been given to the President. So, when I discovered a similar model in my favorite antique shop, I figured that if it was good enough for the President, it was good enough for me. It took years for me to get up the confidence to attempt a painting of it, but like the Lion in the Wizard of Oz, I at last found my courage. The painting measures 19" x 22" framed size is 25" x 28" by Motyka.

The gallery is open by appointment only.